In my opinion, 2018 was downright fabulous. I made a couple of important resolutions. One was to level up as a developer. Another was to become more sociable. Check the statistics, I accomplished the shit out of those resolutions.

2018 wasn’t without its low points. There were several of those but I’m glad the high points were far more and frequent. A lot of my hard work paid off this year. Hours of incessant learning and practice finally yielded fruit.

⛔ Quit my first ever full-time traditional job. I needed a lot of coaching for the confrontational part of this bit. Important lessons here are to never treat a company like family. Your coworkers there, maybe but never the company. That relationship is going be unidirectional, with you doing all the labor for the “family”. Treasure your work-life balance or you’ll burn out. Always be about your moolah. If you feel your growth is stagnating, ask for more consequential work or move on. You really don’t want to become the person with years of experience on paper with nothing knowledge-wise to show for it.

📚 I started learning web development. Big moves that paid off (literally). I also got my freeCodeCamp Front-end Development Program certification. That was a big deal. It legitimized my month-long effort to learn HTML, CSS, and JavaScript. 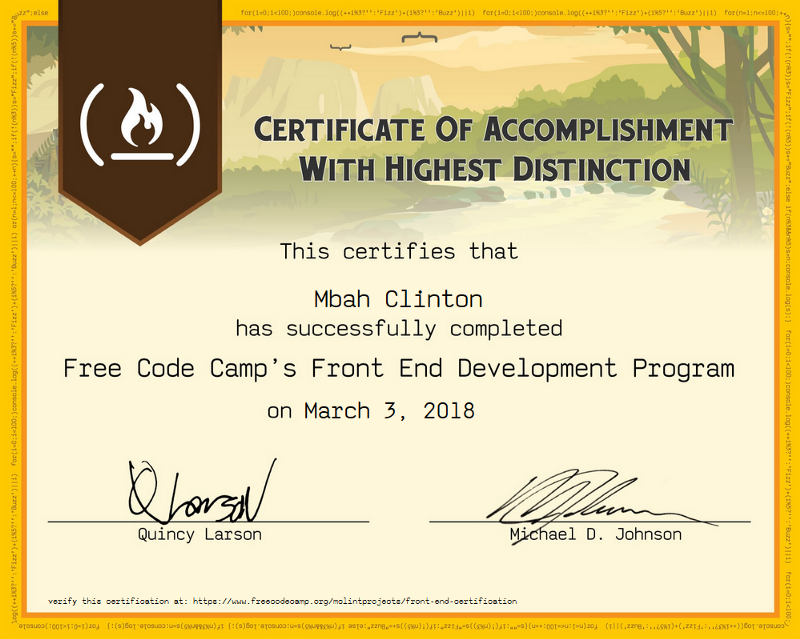 I cannot recommend freeCodeCamp enough. It just like Glitch (opens new window) was some of the free tools that were pivotal in my journey to becoming a web developer.

📚 I participated in Google’s Re-skilling Africa Program on PluralSight and got certified as a JavaScript expert.

👩‍💻 In a bid to step out of my comfort zone, I participated in my first ever hackathon. It was forLOOP Ghana’s maiden edition and I (Team 1) came in second place. I proceeded to participate in GTUC’s ACS Code Fair and FigmaXGithub’s Hackathon and came in second place (opens new window) in the former. I had to face my fear of public speaking to demo my work. It was also a delight to hangout with like-minded people talking about something I enjoyed.

👩‍💻 I got featured (opens new window) by Glitch. Glitch is a tool that was pivotal in my journey to becoming a full-stack developer so being noticed by my senpai was nothing short of staggering.

👩‍💻 I worked with top 🇬🇭 developers. Under their close guidance, I spearheaded a couple of engineering efforts that taught me a lot of invaluable lessons going forward. This was my first taste of remote work and honestly, full-time traditional in-office work has been forever sullied for me.

💕 I became much more sociable and made a lot of amazing friends and professional connections as a result. In Drake terms, I started wearing less and going out more. My favorite bits were the several outings with my friend Elorm during the summer break, Serallio Fridays, and Detty December.

💕 I did a lot of learning about relating better to others, self-love, happiness, suicide, consent, feminism, gender roles, and professional development among other important topics/issues. I also did a lot of introspection about harmful social media habits I had picked up, becoming a kinder person, a framework for my happiness and success, and what I needed to learn to become an indispensable developer etc etc. I had to do a lot of reading for this bit and articles, books, and tweets from my way smarter followings were consequential resources.

💪 Started a 1 year gym regimen because the Jason Momoa body av to fokn kam on. Waking up at 5am everyday for a month took a lot of discipline and thankfully I now have the biceps to show for it. I’m currently in my 4th month. There’s been several cheat days/weeks 👀 but I think I’ll make it.

🤑 I’m happy to say I did not fumble the bag. Not once. I was all about the bread and secured it every single time.

One of the most important things I learnt this year was not to worry. I always tell my mom she worries too much but I think I worry more than her. A lot of the things I was worried about during the year eventually worked out just fine and all I had to do was fix the issues in my control and wait. All of my biggest, baddest quandaries succumbed to that simple tactic.

Going into 2019, I have no idea what it has in store for me. I plan to top 2018. Graduate, get a well-paying remote role as a full-stack software engineer, intensify my hoe phase and/or fall in love, be an even better friend to my amazing friends, and not die among other things. Hopefully everything works out. If not, I still think we gon be alright.